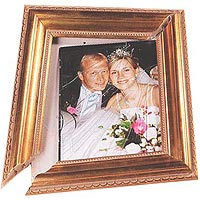 feedback we receive from them, for which we are grateful.  One sunny ( sometimes a rarity here in Melbourne )  Saturday morning a young mum visited us bringing an A3 frame with a broken glass. She asked if had  a frame to match, which we did, the frame being a pretty much standard 3x2 cms box moulding picture frame profile.   We showed her one of our frames and she was on the cusp on buying it when she asked, pretty much by way of a  throwaway line,  ”I don’t suppose you cut glass, do you?”  When we replied in the affirmative she decide to save a  little money and buy an A3 glass replacement instead of a whole new frame, i.e.:  $8.52 vs $16.25.

This led us to think, we not post a blog discussing when the repair of picture frames?  And here we are.  Now then, there was a time, not so long ago, when picture frames were regarded in a far higher esteem than today.

Some were antiques or vintage,  often around valuable art or paintings,  or family heirlooms, passed from one generation to another.  These type of picture frames were not only part of valuable art themselves, but investments that appreciated with the passing of the years.

And yes, certainly, if these frame broke, were damaged, or needed re-joining or repairing,  yes, it these would be taken to a picture framer or art conservator and repaired.  The superlative picture frame and art example below , the Leonardo Da Vinci’s  Salvator Mundi  was framed in a 16th century Italian picture frame values around AUD70,00, give or take.

It goes without saying that a picture frame so rare and valuable, demands care, attention, periodic inspection and maintenance.   The repair of picture frames or restoration would be carried out as often, or as required, with little expense spared.

Alas these are a rarity nowadays therefore we will not dwell too much or too long on these rare picture frames.  Let us then move on and lay out a basic description list and understanding of the various picture frames and the varying nature and degrees of damage.

a)The ready-made poster frame . The ubiquitous department frame poster frame, is the the most popular type of picture frame nowadays.  By “department store frame”,  we mean a no-frills, inexpensive, mass-produced picture frame that China and other Asian countries export to other countries all over the world, including, Australia.  We import some as well,  and here below is of our top-selling A2 size, wood, black poster frame: 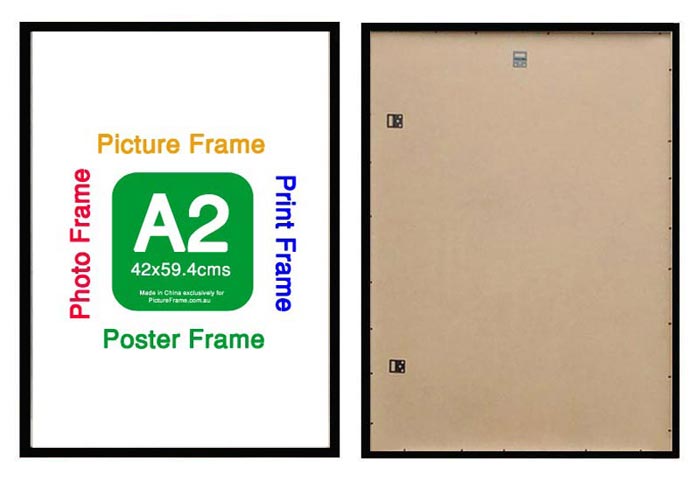 Repairs of picture frames made from paper-wrapped Medium Density Fibreboard (MDF) imitation, or reconstituted wood which, while cheap to produce, market and sell, isn’t easily  or readily repairable because the MDF isn’t solid, grained, real wood.  An  example of a typical break is shown below.

The glue joining the frame ( if there was any ) has  failed and lone, the small  Vee nail isn’t sufficient to hold the joint together. The frame has sprung open and one or more sections have split or cracked.

While on the subject of joining picture frames with vee nails,  there’s a popular misconception that these steel devices are what hold the frame together, but this is wrong.

The vee nail ( as shown below ) is merely a temporary fastening device to hold the surfaces of a corner joint together until the glue dries. 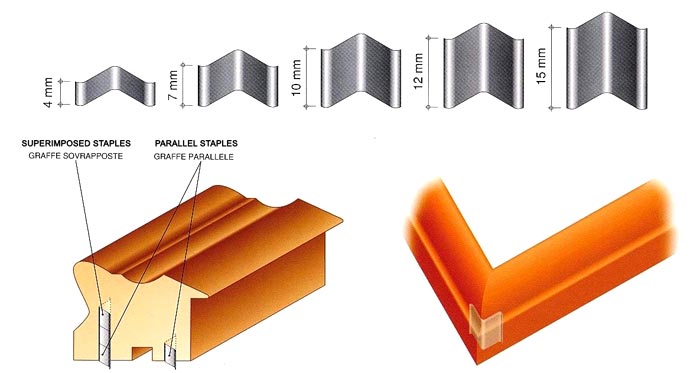 After the glue dries and cures, the vee nails could even be  removed and the clued picture frame assembly should still hold together.

But now, let’s return to broken  MDF frames. More often than not with these type of frames,  when a joint breaks,  one or more of the frame sections also split open. This is because, and as shown below,  MDF has a tendency to separate when stressed, nailed, screwed of parallel with its face or worked into it layers, as shown below:

And while this is not impossible to repair, the average picture frame owner is not a skilled wood worker, and he or she will find it difficult  to do so.  There’s also the matter of cost effectiveness. How much  time and materials is one going to expend or deploy in repairing a cheap picture frame that is easily  replaced for a few dollars?

This is why, when an MDF frame falls off the wall and only the glass cracks, it’s worth repairing.  But if the frame breaks as well, then the  repair of picture frames of this type is not cost-effective and, in most cases, it's cheaper, simpler  and faster to throw it away and buy another one.

b)The plastic, polystyrene (PS) picture frame. These solid plastic mouldings were introduced late last  century, in the age of “plastic fantastic”. Practically speaking, these PS mouldings from which millions of photo frames and picture frames were manufactures were actually a pretty good product.

It was cheap, easily extruded, cheaply finished and manufactured and could be readily cut and joined. It seemed such a  good invention and hot product at the time, just like VCRs’, flares, Polaroids,  faxes,  CDs, to name but a few.  Alas, the price of oil, energy crises and the green revolution killed off this versatile product.

However the millions of frames it was propagated are still ensconced in people’s homes all over the planet. Occasionally, we still get  the odd one back for repairs, much like the example below: 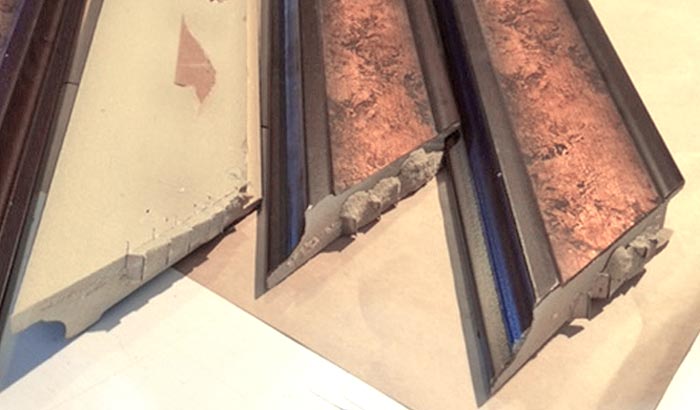 The main problem with the repair  of picture frames with PS construction is that the joints never break cleanly.   The embedded vee-nails always seem to grab and tear off chunks  of plastic from both faces of the joint, as shown above. And while with skill, time and patience all this scan could be remedied, it’s not a fast or easy fix.

To remove the vee-nails, re-build the cavities with filler, re-size the joints and rejoin the frame  just takes too much time to fix, and in most cases,  it’s cheaper to buy a new picture frame.  As a Customer famously once said to us, “ The picture frame just cost me $10, why should I pay $ 40 to fix it?”

c) The average, run-of-the-mill, custom wood picture frame.  A typical home casualty is shown below.  It is a wood frame obviously dropped on one of the corners which has sprung, or opened up. 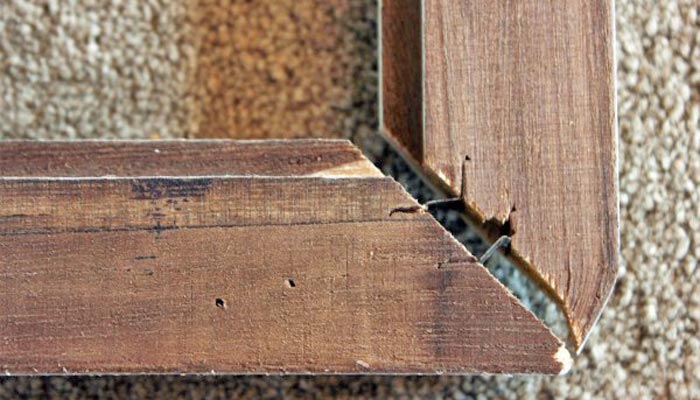 While the moulding does not seem valuable or expensive,  the picture frame may have had great sentimental value for its owner and in some cases, it will need to be repaired, because of the sentimental value, or attachment.

As with most picture frames this job is best tacked by a professional picture framer.  Not only he or she will have the requires experience and skills, but also the machinery and materials to do a tradesmanlike job.   Wood is much more pliable, forgiving and amenable than plastic and is more easily re-worked.  In the example shown above, the vee-nails will be removed, any cavities filled, the joins re-mitred and re-joined.

After the woodworking PVA has cured , any minor fissures, cracks, dents or scratches can be quickly filled or touched up.  If none of the moulding  sections have split this sort of work may take up to an hour’s work or depending between $50 to $100 depending on the location and the picture framer.

We find that picture framers in premium locations paying high rent appear to charge more than other framers in secondary locations with cheaper rents, which makes logical business sense.  Some people occasionally do their own repairs such as stapling the back ( see photo below)  rather than vee-nailing it.  However this method isn't very good. 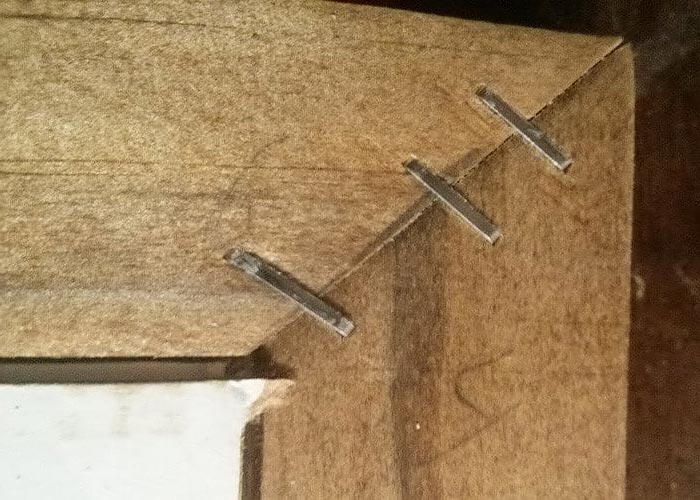 The problem with using steel staples, rather than vee nails, is that the staples tend to grab only the back of frame and the top of the joints open up, since  these do not  penetrate the moulding deeply enough.  occasionally a custom picture frame is too badly damaged, in which case we construct a new frame.

d) The antique, ornate, period, custom frame.  Genuine, ornate art custom frames are fairly rare to come by. Most of the ornate frames that are around aren’t genuine, handmade frame but factory-churned  Asian reproductions.  And while these have their place in the marketplace, so to speak, in the main, repairs of picture frames of this kind aren't really worth it.

These often look like the real thing to the uninitiated, their imitation, gold metal-leaf and scrolls are mass-produced from repetitive factory moulds. Should a genuine, European or New World ornate frame come to us for repairs we would refer it to qualified and experienced art conservator, restorer or specialist museum picture framer.

The main reasons why such specialized professionals are suggested is, at least, threefold. Firstly, the frame may be of significant or historical provenance with both research and documentation possibly required.

Secondly, gold leaf work and gilding require highly specialized professions requiring unique skills and sometimes, decades of experience.  And thirdly, plaster moulds,  patterns or hand carving may be needed to duplicate any missing appliqués or onlays which most picture framers are not equipped to do.

As to the cost, we will leave that to the experts but, as a very approximate indication, the example being restored below could cost several hundred dollars. This is not at all  exorbitant, when one ponders on the possible rarity,  apparent antiqueness and probable value of the original painting. 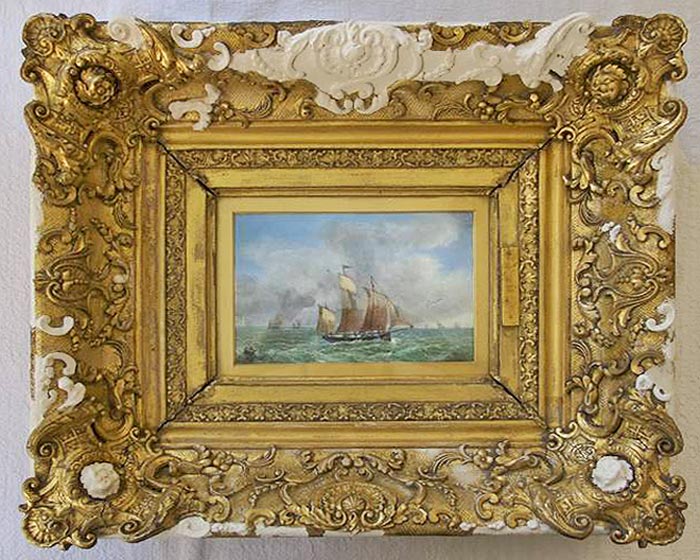 e)  Round, oval and spandrel picture frames. These unusual or uncommonly shaped and crafted picture or photo frames are now quite rare.  Most picture framers are not simply not equipped or trained to restore or repair picture frames such as these.  More than anything, these particular frames serve to underscore the change of times from yesteryear to today.

For hundreds of years, and perhaps only as recently as a generation ago, many well-to-do, or more affluent Customers, regarded a bespoke picture frame as an accessory well worth expending money on, or  a family heirloom, even.

Such family valuables were passed from one generation to another, being preserved, maintained and appreciating in value, often financially.  Alas, this new century has hastened the decline in requirements,  standards and workmanship, with the vast majority of modern picture frames and photo frames now being disposable, or throwaway ones.

To conclude, should you ever come across one of these rather special or unique frames needing a little TLC, an art restorer or conservator should be the first port of call.  We thank you for reading this post  on the repair of picture frames.

1 thought on “When to, or not to, repair broken picture frames”