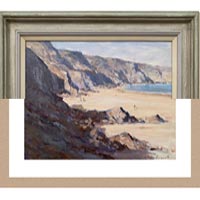 moved out of your old home into a new one.   Or you’ve moved from an older flat into a newer apartment.   Perhaps you relocated from older style business premises to more modern ones. The end result is the same, either you, your wife, or family have decided,  the old frames just won’t do in the new location, these will need updating.  We come across this situation a few times a month, in most cases, it’s a retiree couple moving to a brand-new apartment.  Regardless of the circumstances the Customer’s requirements are   invariably the same: the old artwork needs a makeover.   In many cases this is a fairly straightforward process.  The Customer comes in, consults with the picture framer,  and the old frame is then replaced with a new one.   In lots of other cases though, several other unforeseen difficulties difficulties and problems can compound the issue.

And before we illustrate some picture frames with “before” and “ after” samples of re-framing, it is worth mentioning some other difficulties associated with this particular task.  Perhaps the most difficult one is  re-imagining a new frame on a loved and cherished photograph that’s hung on a wall for decades and has been looked at lovingly for thousands of times.  There seems to be something about removing or changing the frame  itself that some Customers find unsettling.

When upgrading picture frames, they often and subconsciously, without realizing it,  they go back at selecting yet another gold frame, even though they came in saying that they didn’t want gold any more. Be that as it may, it’s  part of a picture framer’s training, and with tact and diplomacy, to suggest and proffer viable alternatives, because that’s what the Customer clearly and expressly requested.

An additional problem associated in upgrading picture frames and re-framing artwork is the deterioration often encountered when de-framing a piece of art, or a document.   Up to around twenty years ago most picture framers weren’t trained for, nor did most Customers about,  preservation methods or conservation techniques.

What we can say, however, is that nowadays framers are much aware of the fragility of media and hazardous materials. Years ago, many framers routinely backed art, papers and documents either with acidic paper boards, plywoods or fibreboards.

What wasn’t widely known or understood at that time was that these materials abound in lignin, a highly acidic wood by-product which “yellows” art making it brittle and discolouring it with red-orange “acid-burn” marks.

The cause-and-effect of these past picture framing practices is therefore often discovered and witnessed only when re-framing long-framed art. In many cases the art in question has great sentimental value and the damage is only discovered at the time of re-framing.

In such cases, conservation, or at the very least, acid-free framing is recommended, this however is generally more expensive than normal picture framing.  An additional problem to acid burn is the fading of artwork  due to unsuitable glazing   Again, this is a legacy picture framing conundrum.

It is a conundrum rather than a specific problem because of a couple of reasons.   The first is that fading due to Ultra Violet rays damage was not widely researched or recognized decades ago and a lot picture framers were not aware of this.

The second is that Customers often deliberately choose the cheaper, plain clear float glass in place of the more expensive Ultra-Violet protecting glass because of the higher  cost.

It can the be well argued that this is not really a problem because Customers are free to make an informed decisions even when a chosen option is less advantageous than another one.

We ourselves, have  often been presented with these decisions even when after Customer were advised of the dangers of fading and deterioration to the art.  Nevertheless,  when something particularly valuable, cherished, or precious to the Customer is unframed and deemed in danger of ulterior fading we strongly recommend reglazing with U.V. Protection glass.

Yet one more difficulty frequently encountered when upgrading picture frames and reframing older works is that everything has been prodigiously and quite messily taped an-or glued everywhere and all over.

This can be a serious problem,  particularly  when cross-stitches and other delicate embroideries are so regrettably  mounted or fastened.  Removing fabrics so stubbornly stuck to the backing board, to the glass, or to the frame even, is daunting, for the danger of tearing and pulling threads and thus damaging the embroidery is very possible, real and present.

In these circumstances we task our most skilled craftsman to try and safely demount and remove the art, and failing that, we contact an expert conservator.  There can be other problems aside and beside acid burning, fading and mal-mounting.

Still another one is that of damaged or failed frame sealings with dirt and grime entering the picture frame receptacles.  For many decades, it was the custom of picture framers to seal the back of picture frames with water-gummed paper and Kraft paper.

While this did seal the back of the frame for a while, it also created a veritable banquet for silverfish to feast one.  These wingless insect pests voraciously consume any picture framing component that may contain polysaccharides starches and dextrin adhesives.  In picture framing,  these elements are commonly found in many papers, cardboards,  book,  carpets, clothes, paints, photos,  and so on.

They will energetically chew and hole papers in order to consume the paper paste or glue as well as tapestries and embroideries. When super-duper hungry, they’ll also eat up leather and synthetic fabrics.

These tough little buggers can live up to 8 years and are known to survive for a year or more on just moisture and nothing to consume.  We have lost count of picture frames’ papered backs we have found full of holes, courtesy of these insatiable insects. 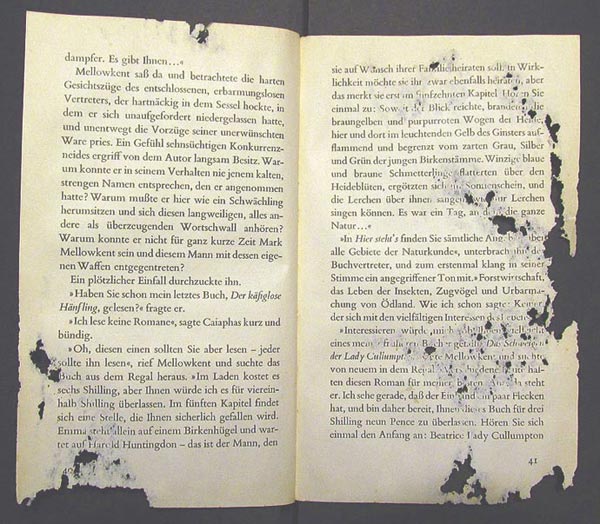 When we find picture frames infested with these all we can do is to make sure that the infestation is clear before reframing the art.  If necessary, and art conservator is consulted as top possible repairs and restoration.  All that said, we now present some before-and-after reframing examples for your consideration:

The first example below is quite common, a traditional, family colour photographs framed in an ornate, cold frame.  There must be literally hundreds of thousands of these still hung in family homes all over the world.  While quite suitable at the time it was framed, around the 1980’s or 1990’s, it very much passé in today’s modern décor. 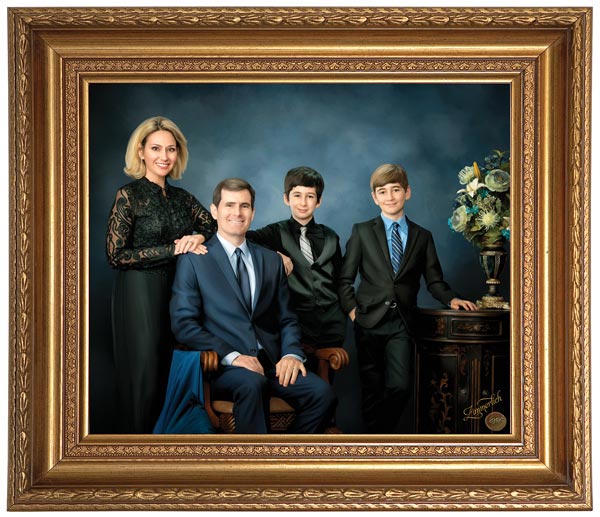 Below is the very same portrait reframed in a still somewhat formal, but much more modern presentation.  Immediately one can feel that the reframing gives more prominence to the subject matter, the family.  The white window mat  conventionally sized and proportioned   highlights and lifts the persons in the photograph in the beholder’s view simultaneously achieving a much more look and feel than before. 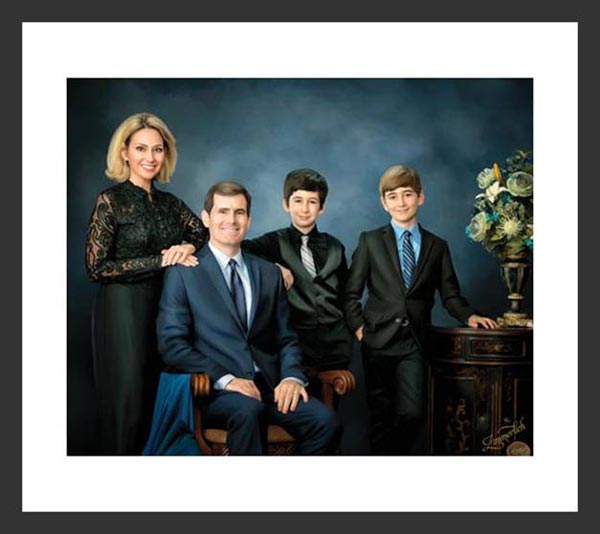 This second example hereunder is also a late 20th century,  “pastel” fashion oil painting framing.  The bevelled fillet was also pretty much de-riguer for the times and technically speaking, it is nicely framed.

There are no prepotent moulding colours nor do the tomes overwhelm or suffocate the beachscape. Sadly the stacked arrangement and moulding profile are so outdated that any modern decorator would scream in visual agony. 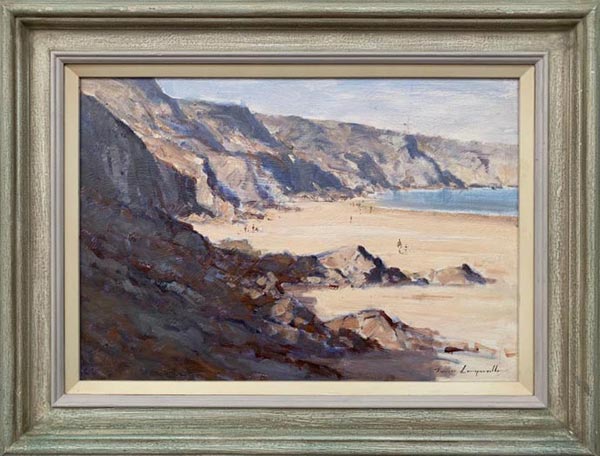 But, voila’ , and here’s the same painting transmuted into modern, 21st century vogue.  Gone is the stolid, fluted moulding and in it place there is a sanded, raw oak square profile moulding much more in keeping with today’s trends.  Again, the single, white window mount visual device, successfully separate the art from the frame thereby enhancing and highlighting it.  Paintings, when matted, should be glazed with spacers to avoid the glass touching, rubbing or coming into contact with the medium. 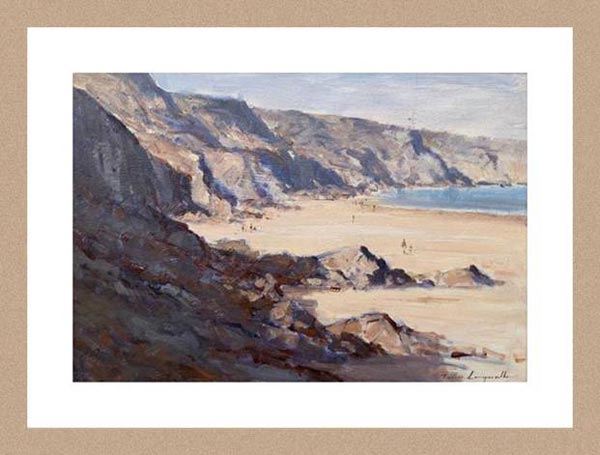 Yet a third example is the morbidly obese baroque stock frame enveloping the young lad’s portrait pose below. Little of redeeming value can be said of this ostentatious and prepotent frame.  It overwhelms the subject, engulfs it drawing all attention to itself thereby defeating any positive intent towards good picture framing 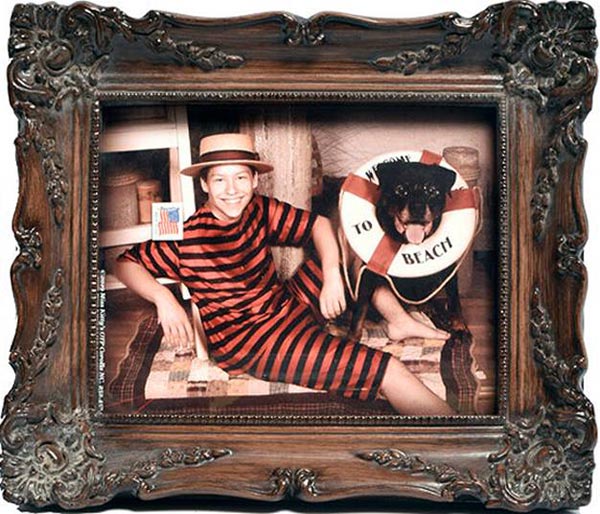 The same image, reframed in a light, wood, ridge-textured and exotic finish, complimented with  a white window mat looks much better.  The young man has now been liberated from his tenebrous prison and now springs to the fore, and to life, as it were. 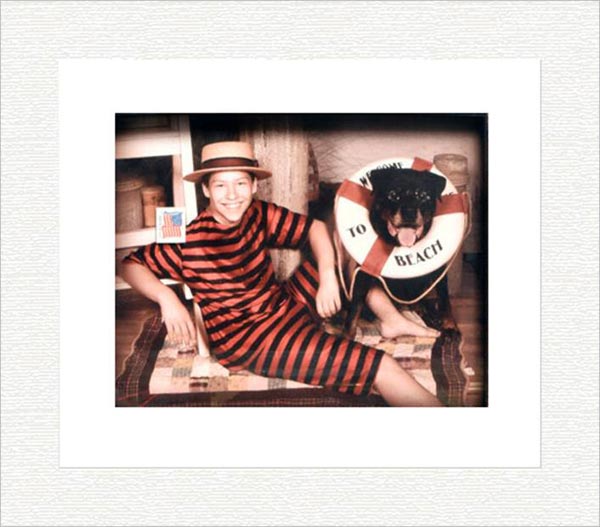 Apart and aside the obvious stylistic changes there’s also the matter of picture framing prices.  None of the above example were made with ready-made picture frames because it just wasn’t possible.  This is because the widths, sizes and thicknesses involved were non-standard and requiring custom materials, sizing and cutting.

And while desirable for some occasions, of-the-shelf-frames just won’t work in reframing and custom picture frames are invariably required.   Alas, custom picture framing hasn’t become cheaper of the years, and if anything, it costs more now than what it did 20 or 30 years ago.

Whys this is so is beyond the aim and scope of this post, suffice to say that the old saying that the labourer shall be worthy of his hire applies to the picture framing trade as much as every field of human endeavour.  And without belabouring the point made earlier that reframing is often more difficult than framing,  the picture framing consultation for the former is often more difficult and prolonged than the latter.

To sum it up, in upgrading picture frames, reframing is more involved than first-time framing, it is very worthwhile and often, the only way to transform and rejuvenate cherished, though  aged memories.