Picture frames styling have changed dramatically in the last few years. Ornate frames, pastel mats, traditional colours and woods have been supplanted by cleaner, linear shapes and pale colours. Below are some new style ideas and examples. For help with orders, see Help and FAQs or use the Contact page.

Complimentary white and off-white frames with tints, tones and shades of white mat

While discussing picture frames decor ideas it should be remembered that, white picture frames or photo frames, with or without window mats, were decor anathema as recently as few 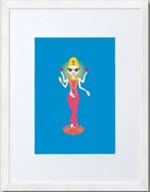 years ago. No one wanted that “hospital” look for their office or home.

But people, fashion and decor have all changed. White frames with or without mats are very much in vogue and have been so for a few years now. The white-with-white look is deemed light and elegant and helping to focus the beholder’s eyes on the image.

Many customers also ask for wider-than-normal mats (normal being 7.5 cms and wide being about 10 cms or more) as they have seen that arrangement at shops or in galleries. Generally, the frame is a square-profile being 4 cms or a more economical 3×2 cms. Often the mat is brighter and whiter that the frame itself which tends to be slightly warmer.

This is perceived as softening the overall feel though different customers have disparate perceptions of the relative warmth, coolness and luminosity of the white colour, and its allied range of tints tones and shades. Discuss this with your picture framer as he or she will, most likely, have several white matting colours for you to choose from.

Framed black and white picture framing arrangements are back in fashion with a vengeance! Its classic, stylish, and 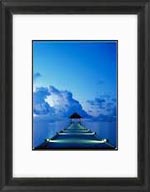 Whether arranged against a pale or vivid wall, black-and-white always, and somehow, looks stunning. And this framing mode allows for either several large frames grouped together, some large frames surrounded by smaller ones or a cluster of small ones, it’s so versatile.

These two colours framed together also permit either a symmetric or a streamlined look. A pleasant symmetry is the easiest to achieve. Collect the same size picture frames in an either a vertical, square or horizontal grid or pattern and hang them in a series.

For suggestions, ideas or inspiration you can scroll right down below to view several indoor picture hanging arrangements for walls,lounge rooms, family rooms, stairs, ledges, etc.

While the matte-finished, black picture frame has been in vogue relatively recently 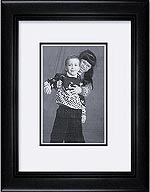 ( in fact, gloss, black picture frames were very fashionable in the 1980′) the double mat, that is one mat fitted on top of another has been around for ages.

Traditionally, and as in the example here, the top mat colour would be lighter than the bottom colour, so as to create a distinct line or border, separating the image from the surrounding mats.

However, during the last few years, with the advent of decors with lighter colours and softer tones, double mats of the same colour, typically whites, are also being requested by customers.

By the same token, and again within the same time period, double mats have generally fallen in disfavour as more and more customers opt for single, but wider mats. Perhaps because the traditional double mat arrangement has been seen as tending to create a visual, inner or another frame around the image, this has been seen as intrusive in modern-day decor and is not as widely used as it once was.

demand about 7 or 8 years ago. The commissions we received weren’t for object framing or memorabilia but for mostly for personal photographs and works on paper.

Shadow box frames are similar to box frames but also have one or more mats added to create a perimeter shadow on the art work below, hence the name.

That said, the shadow in box may be cast in several ways, depending on how the picture frame box is constructed. If the mat is hard up against the glass and the glass up hard to the frame rebate then shadow is cast on the inside, between the mat and the artwork.

Alternatively the mat nay be hard against the artwork but there’s a spacer between the glass and the mat, thus casting the shadow on the outside, between the mat and the glass.

Yet another variation is to combine both the first and second examples and thus creating a shadow box with both internal and external shadows. Go here for more information on the differences between these types of picture frames.

Dark, solid and solitary mat colours are not frequently used on their own as these can often overpower the art being 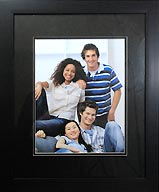 framed and visually suffocate the image to be framed.

Black frames with black mats, or mounts as the English call them, is more of a guys thing, because, yes, it’s true, men prefer, like and order different frames than those of women.

Women are different beings with often diametrically opposite feelings, tastes and outlooks. They will consider, experiment and often adopt whites, off-whites and pastels, particularly when matching with or to a room’s or house’s interior decor.

Men are proprietary, it’s ‘their picture’ and tend to focus more on framing the single picture or image. Women are more collegial, often considering if others will like their decor choices and almost invariably worrying is the picture frame they’re choosing will not only suit the image, but the rest of their house, as well.

And, since you’ve gotten this far …