Somewhat like thieves of the night who break into unguarded houses,  picture frames can also suffer several, unwelcome, 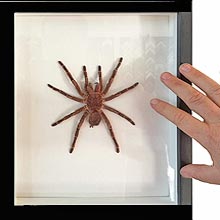 covert pest insect species which sneak inside picture frames and photo frames. Mostly,  these enter a picture frame receptacle via the rear, where the back,  or  backing of the frame, is; and occasionally, through the from where the glass is.  We are able to say this since part and parcel of our trade is the repair, maintenance and cleaning of old and often much loved, picture frames.  And this is when we witness, first hand, the problems these pests often create. Surreptitiously, these live inside picture frames attracted to any white, or lightly coloured matter,  all the while eating papers, mat boards and artwork, leaving their frass everywhere, merrily propagating, breeding little families, and then dying, leaving behind their excrement, art  damage and desiccated exoskeletons.

Good heavens! How can all this happen might you ask?  Simply enough we would answer, and here's how.  When folks retire or the night, most households will task the last person,  or a senior person, in the house, to check that all the appliances and lights are switched off and that, and most importantly, that the back door  as  well as the front door, is shut and locked.

However, with photo frames and picture frames, in most cases the back door is left, maybe not open, but ajar, if you will. The example below is an example of a 30x30cms, natural, ready-made, square box frame showing at least 2, long,  clearance gaps in yellow arrows:

The clearance gaps are there because the backings of these types of frames are always cut  a few millimitres smaller than the the frame size.  Clearances are deliberate design features that allows the disassembly of frames, mounting, cleaning of glass and fitting-up easier for users.

Were picture frame clearances not thus engineered, then the backings would jam or impinge inside the frames or the flexible tabs, making fitting-ups more difficult, and even dangerous, because inexperienced users have a tendency to press and push the glass inside a frame too tightly; often breaking it.

It is by way of these gaps at the back of the frame that insects and other pests can and do gain access to the inside of the frame.  In the example below, here's a wandering garden spider: 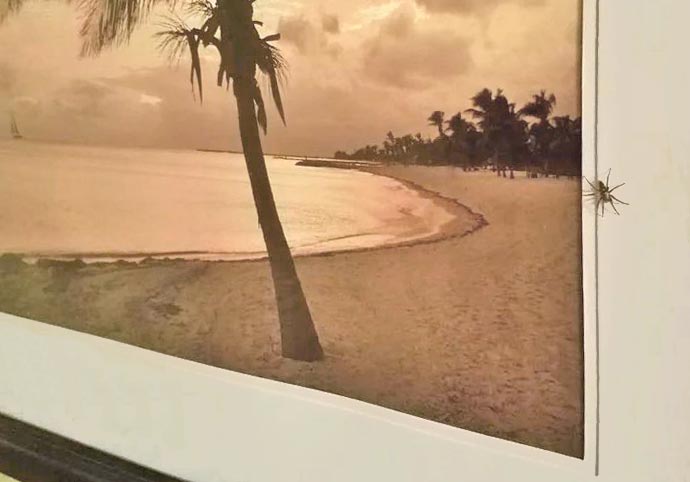 and in the additional example below, here is a colony of the powderpest beetles variety, busily eating, tunnelling and perforating their way through the gessoed, wood moulding scrolls: 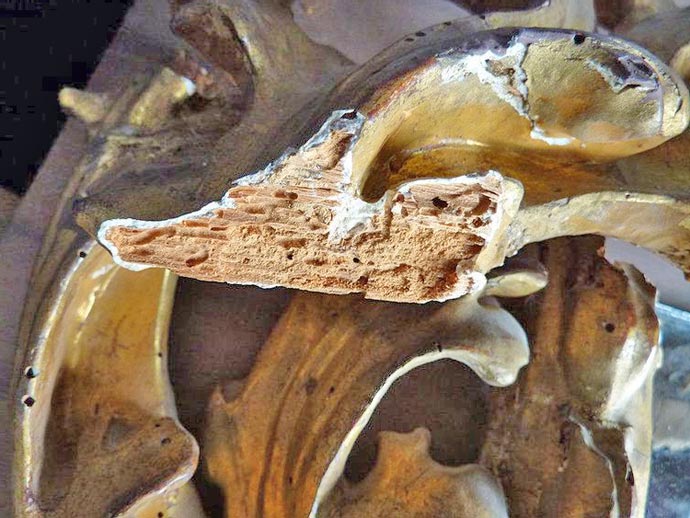 Some of these insect are barely a millimitre long, or thick, and therefore able to infiltrate the smallest of splits, gaps and fissures. 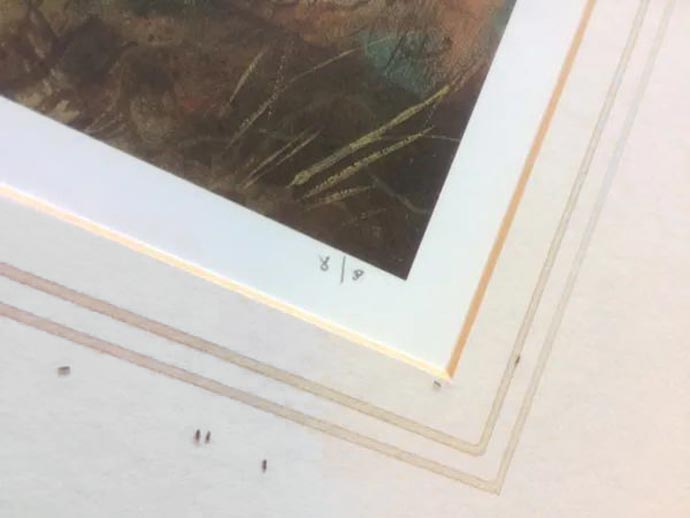 While some of the smallest critters can enter at the front of the frame, in between the glass and the rebate top, most of them will enter through at the rear of the frame, or via the clearance gaps, as detailed earlier.

Fortunately, this problem can easily be prevented by applying, to the four sides of the back of the frame, adequate lengths of picture framer's tape.  This self-adhesive, pressure-sensitive tape, is also known as picture framing tape, framers' tape, frame sealing tape and, or brown Kraft paper tape.

There are at least three main  tape brands used in the Australian picture framing market, these being: Kikusui, Rinrei and Stylus.  All three are very similar in application, colour and performance.  The three most popular sizes are 24mm x 50m, 36mm x50m and 48mm x 50m and as shown below: 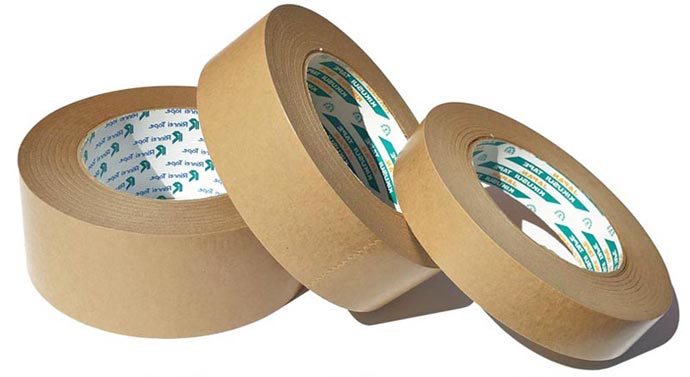 The framing tape is applied by burnishing it, or rubbing it, or pressing it, with the fingers,  over where the clearance gaps are, sealing them and thus effectively closing the back door to unwelcome insectiferous intruders. 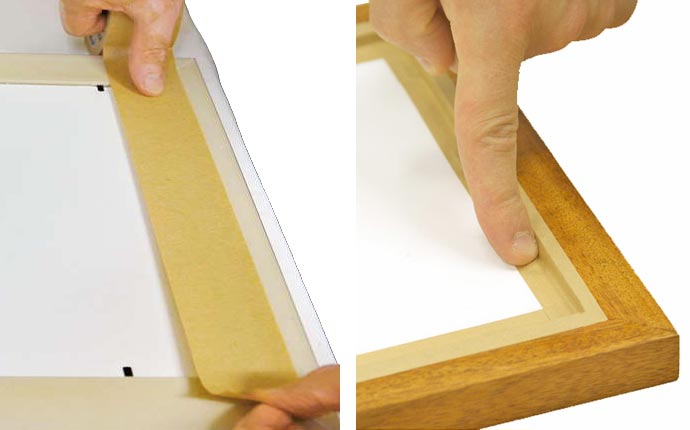 Pest control treatment discussion or advice are beyond the scope of this post but, aside and in addition to the sealing of the rear of the picture frames detailed above, there are  other, helpful, precautionary measures which can certainly help in preventing and alleviating pest infestations.

As mentioned earlier, insect can also invade the frame receptacle from the front of the picture frame, where the glass is.

A simple, inexpensive and effective way to block this entry is to seal off with tape the four sides of the frame sandwich ( this being the glass, the window mat, if any, the art and the backing board )  with something as cheap and simple as stationery tape, and as shown below: 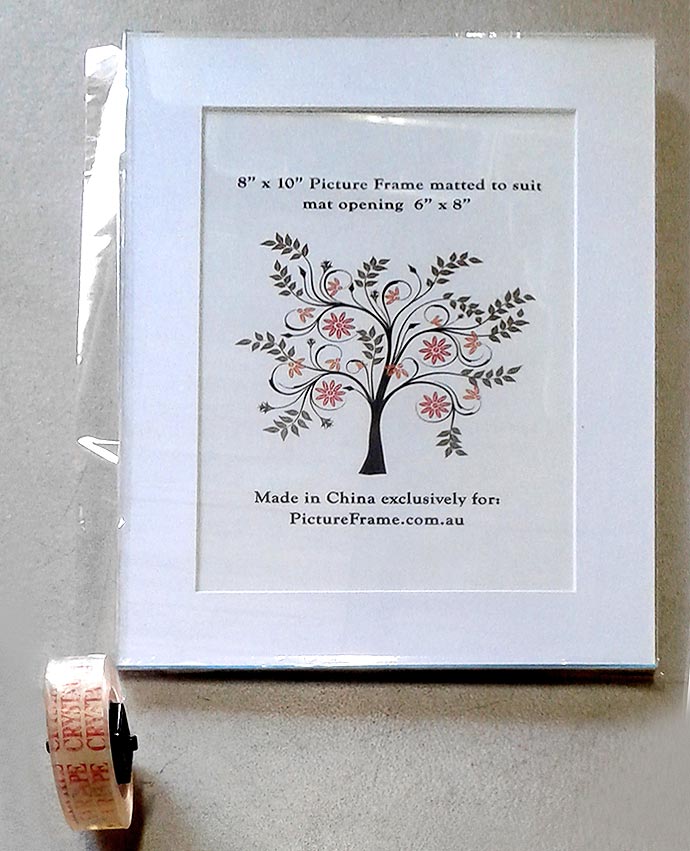 The methods and materials details above serve well for inexpensive, commercial, common, unimportant or replaceable artworks.

However, if cherished, personal, or more valuable art needs to be safeguarded, then conservation or museum quality approaches should be considered, and if in doubt, a professional  art conservator  should be consulted.

An important aspect towards insect infestation minimization is to store surplus or unused picture frames properly and in a suitable, airy, well-spaced and regularly inspected environment.

Stacking them next to or on top of each other, in an airless, dark,  airless, damp attic as illustrated below is to be avoided since this only encourages insects migration, nesting and propagation: 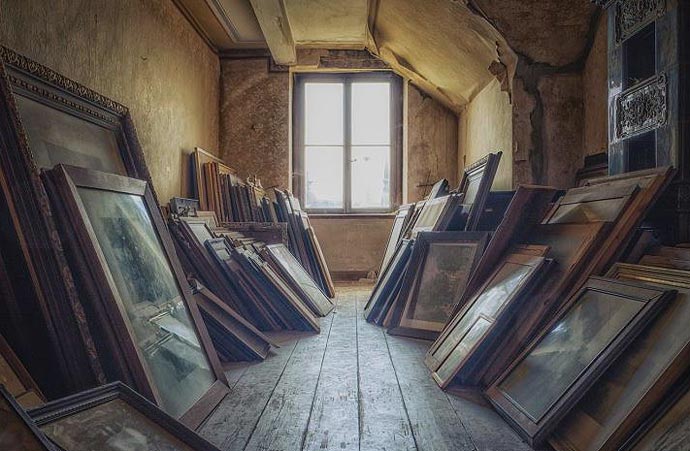 Yet another factor in pest control,  is not to hang picture frames in, on, or in proximity to,  damp, wet, moist or leaky walls.  Moisture will provide insect with moisture, the third element they need to survive apart from air and food. 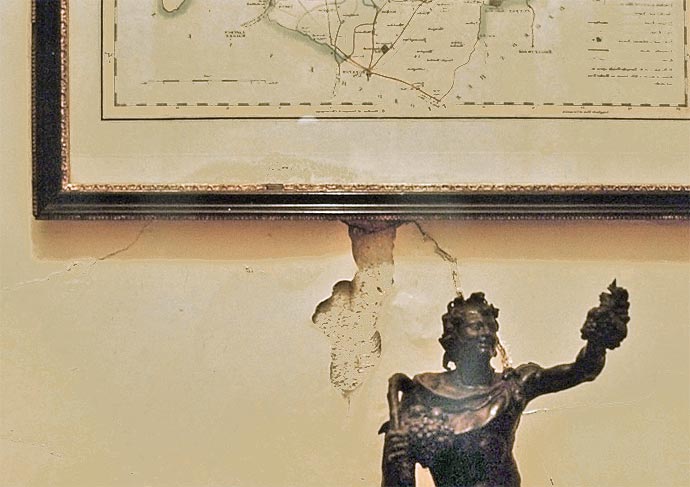 An additional preventive measure is to attach at least two or more feltdot bumpers at the bottom rear section of a frame.  This helps air circulation at the back of the frame since the bottom segment of the picture frame is slightly raised and does not rest flat against the wall blocking ventilation. The example below typifies this problem, with both live and dead mould infesting the back of the picture frame. 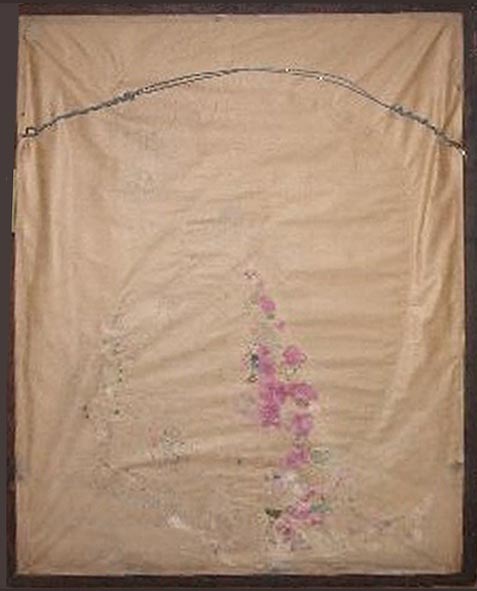 Any air movement or circulation alleviates humidity, discourages mould growth and insect settlements, hence the suggestion of attachig at least a couple of felt bump-dots or bump-ons at the back of every picture frame that is to be hung on walls.. 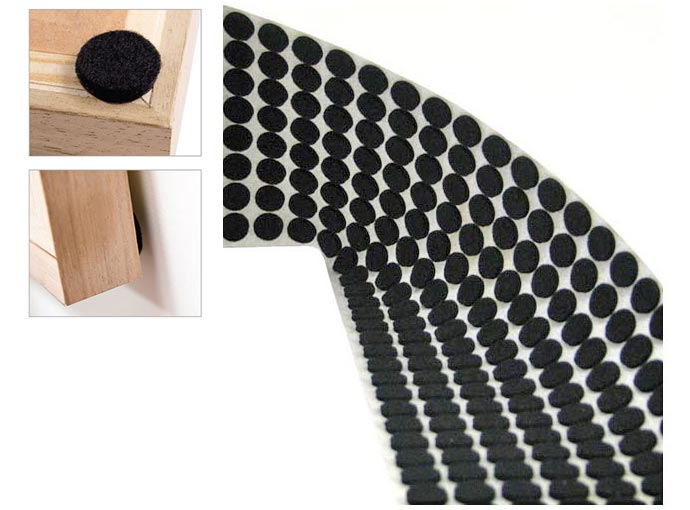 Perhaps a penultimate line of defence about pestiferous critters is good old fashioned housekeeping.  Some of us might be old enough to remember the regular, or monthly, household chores that were done in years gone by, maybe when we were little,  when our families had more time and our lives were not as busy.

Some of those chores may have included dusting the furniture and, you guessed it, dusting over, around and under all the photo frames and picture frames that hung on the walls.

And it would have been during those clean-ups that problems such as insects in, on or around picture frames would most probably be discovered. Alas, we don't know of anyone who regularly dusts furniture nowadays, any more.

Perhaps the ultimate point to consider in the prevention of insect establishment and nesting is to avoid placing picture frames above or near heating sources such as heater ducts.

We make this observation because from time to time we receive from our Customers  framed art needing disinfestation, or cleaning.

When we ask the Customers where in the house, or office, the infected artwork was located, quite often we are told that it was by, or near to,  a heat source.  This leads us to believe that providing a warm environment to insect only seems to encourage infestations.

Category: How to care for picture frames