Some weeks ago a senior Customer came to our factory wanting us to make some custom size glass clip frames.  The 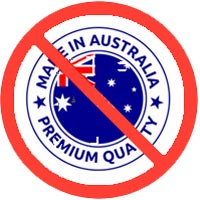 desired, odd-size clip frames were to match other existing ones on her family wall.  There had been new additions to her clan, she said, and she wanted the wall photos decor to match. She volunteered that she was a pensioner and could not afford to pay much.  Also, she helpfully added, she knew what the prices of the clip frames should be.  Since the special size clip frames that she wanted were smaller than the A3 clip frames she saw on our display for $6.65, hers should be cheaper, maybe around $5 each.   We then informed her that none  of our clip frames are made here in Australia but are all imported  from Asia, and that’s why they are so cheap.  “What, don’t you people make them?  Aren’t these made here in Australia?”  she gasped in disbelief, amost shocked by the revelation. No, we replied adding that there might still be one or two specialist framers who could make the frames for her, but the cost could be around 10 times what she was expecting to pay.

The Customer’s question and ensuing incredulity brings to the fore the huge pricing gulf between the cost of making picture frames ( and just about anything else ) in Australia and the cost or making them overseas, typically, in China. This enormous disparity is typified by the chart below showing that to make products in Australian at $39 x hour is 19 times more expensive than making them in China at USD $2.10 x hour. 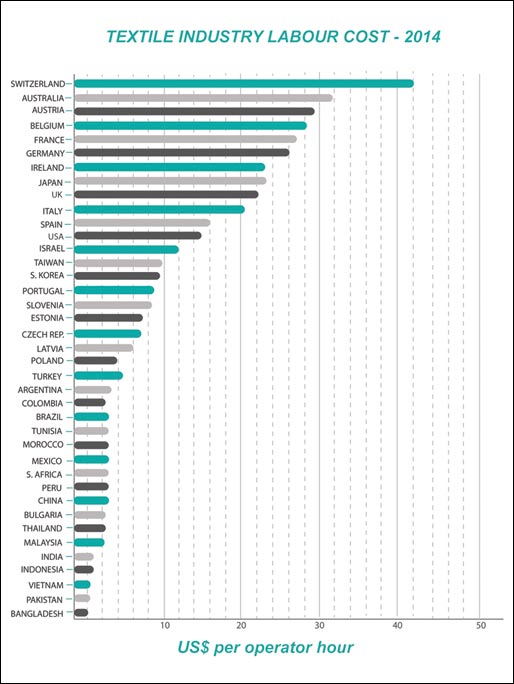 Readers who disbelieve the $39 x hour Australian labour cost figure ( perhaps because they are paid less than that )  neglect to take into account the many, other, additional costs employers are burdened with in employing workers.

Some of these are: Compulsory Superannuation, Payroll Tax, Sick Leave, Annual Leave, Workers' Compensation, Council Rates, Water Rates, GST, business and buildings outgoings, insurances and other Federal, State, Local Government taxes and  a host of other expensive, sundry levies, charges and incidentals.  Generally these imposts and add-ons are completely disregarded by workers because they are not liable, they never see the bills and they never need to pay for them.

But their employers do, hence the the total labour cost which is always much higher than their hourly rate of pay.  The table of statistics shown above applies to the textile industry, we can assure readers that it is the same, if not worse, for picture frames and photo frames manufacturing.

There are many historical reasons as to why Australian manufacturing costs have become so disastrously uncompetitive in the world labour market.  Chief amongst these is the relentless increase in the costs of wages which began strongly in the early 1990’s and accelerated in the 2nd millennium. 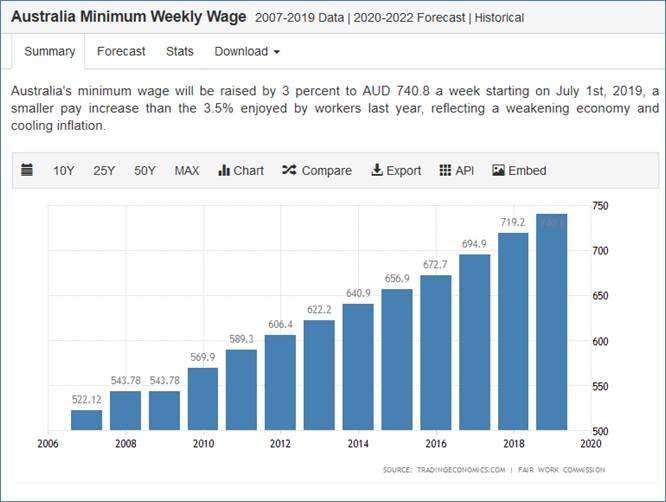 In addition to the regular increases in wages, politicians of all colours, creeds and parties proffered the plebes many false promises. Chief amongst these was that old, but much loved, laborite canard of giving workers a shorter working week, for the same, or even a higher pay.  So, when offered something for nothing, most people swallowed it, hook, line and sinker. And this is how we started to work less and less: 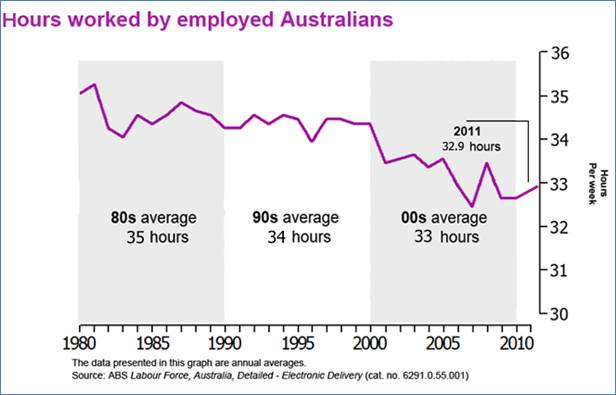 The accumulation of all those many, decades of national smugness, industrial complacency and concomitant unproductivity has resulted in Australia inflicting on its manufacturers the highest minimum hourly wage payment in the world. 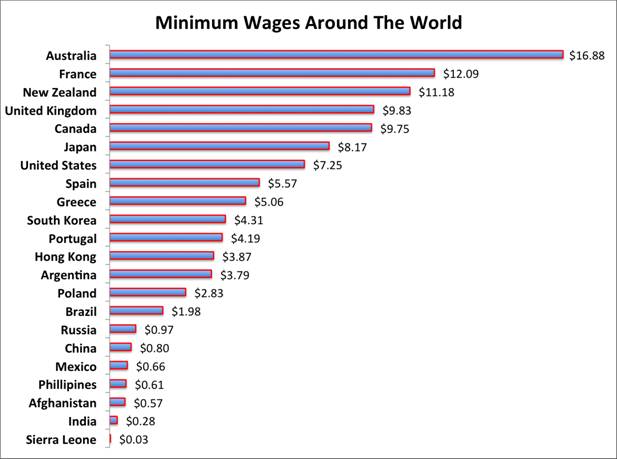 And this is core reason as to why Australian manufacturers began en masse to close down their Australian factories, sack workers and contract out their manufacturing operations to Asia, mostly in China. The graph below shows the wholesale factory closures and mass sackings of workers timeline that distinctly began during the latter part of the Hawke-Keating Labor years and continues unabated to the present time. 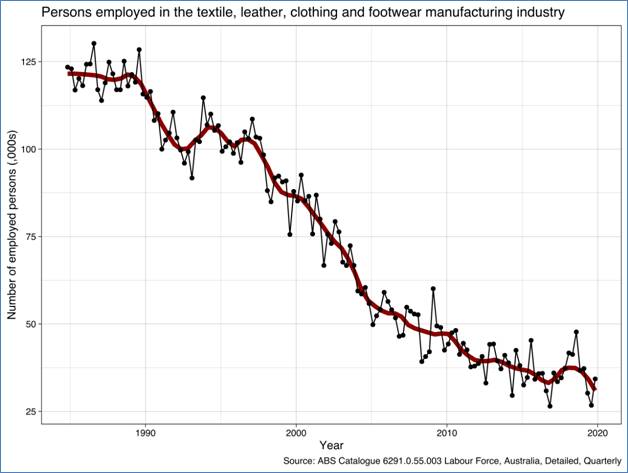 In a January 2007 interview with Kerry  O'Brien, the then Labor leader Kevin Rudd, declared his utopian vision for the Australian economy to be bigger than just being China's quarry and Japan's beach.  That was 13 years ago.

Alas, Kevin07 has long since been politically defunct, we have many more quarry holes that are now bigger, deeper and we have also become China’s, as well as Japan’s, beach.  As for Kevin’s famous aspiration for an Australia that makes goods, that has been annihilated by our world-record, manufacturing uncompetitiveness .

Why?  Because, and in plain English, when an entire nation chooses to works less, make less and pay itself more, it becomes too expensive to do business with, that’s why. 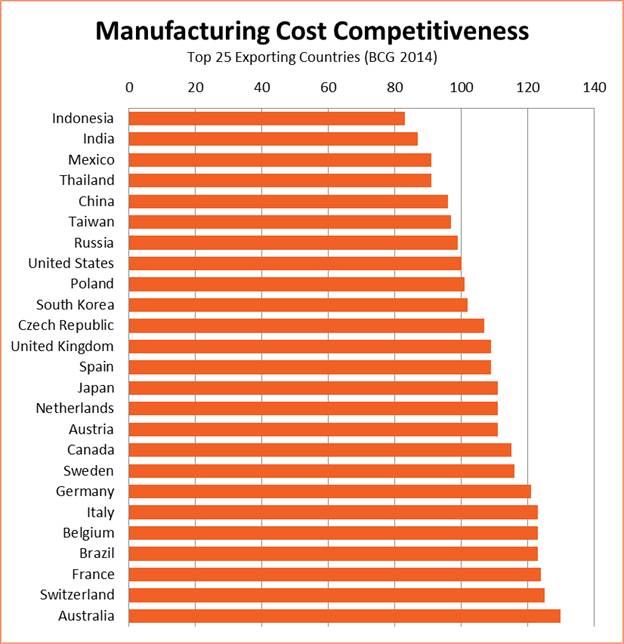 The statistic below show how much less stuff we have been making, and progressively continue to make less and less, in Australia. 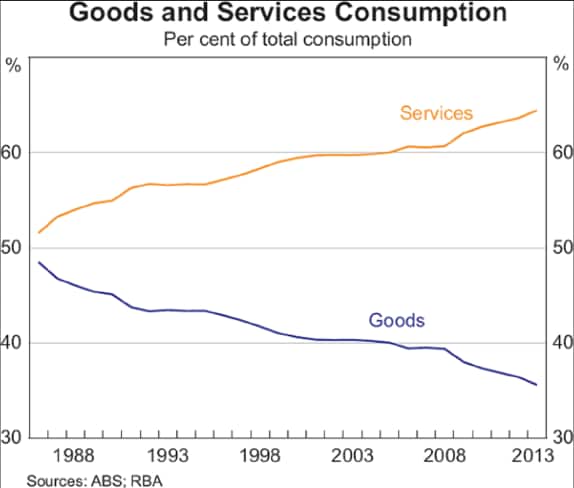 An important point, which was left unstated at the beginning of this post is that, yes, Customer may still want clip frames, but they want them dirt cheap.  It doesn’t matter to the that there are 46 different operation required in manufacturing a single clip frame, they'll only buy them if they're cheap as chips.

A manufacturer we personally know, in Guangzhou, China, was recently discussing with one of our Managers China's rising labour costs.  We then converted their Yuan Renminbi to our Australia Dollar and realized that the Chinese Manufacturer was complaining about having to pay his workers AUD1.86 x hour.

Ergo, is it any wonder that, by and large, Clip Frames are no longer made in Australia?  Of course it’s not just clip frames and picture frames that we stopped making.  One could add a very, long list of products,  eg:, motor cars, trucks, aircraft, fridges, washing machines, kitchens, tools, machinery, televisions, vacuum cleaners, fans, clothes and shoes, just to name some of the obvious ones.

So if we don’t work in factories anymore making all the things and gadgets we just mentioned, what do we do?  The answer can be found in the snapshot below. It says that, in the main, we now do stuff to help other people, we provide services. 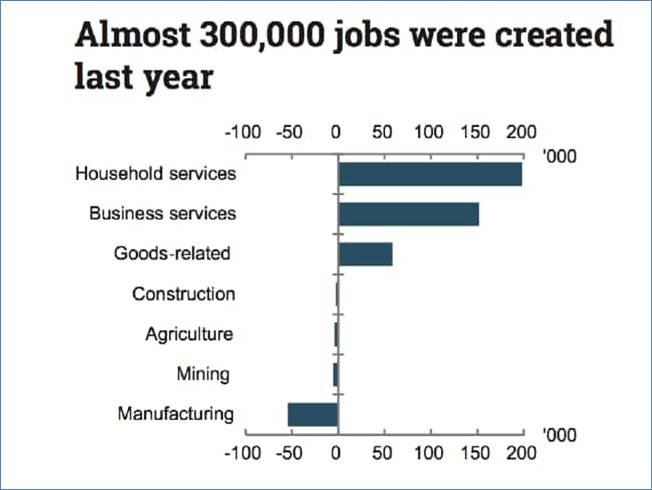 Alas, the problem with selling personal services, is that no goods are being manufactured that may be sold to other nations in order to earn money from them.  One day in the future, we will run out of the lucrative oil, gas, coal and other golden dirt that we have been flogging to Asia for decades.

We don’t actually make anything anymore, so what else will we sell to other nations once we run out of our resources?   Or, mayhaps, will the Reserve Bank of Australia just speed up their printing presses to pump out more banknotes, as Weimar Germany did in the early 1920’s or more recently by Zimbabwe in 2008 ?

Alack, the future courses of Australia industrial, economic and monetary policies are beyond the scope and tenor of this post and shall not be dwelled upon any longer.  Suffice to say that it seems a shame that Australia can no longer make anything, even a plain clip frame, unless it’s so cheap that nobody here can afford to make it.