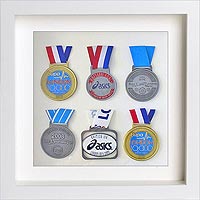 know what a 3-Dimensional Shadow box is, how it is made and what it can be used for. But once or twice a month we receive phone call inquiries from "newbies".  These newcomers want to know what a shadow box is and can they use it to put  what they want inside it.  As these types of box picture frames are a little complicated, have multiple components with size limitations, clearances, depth limits, etc, it can be a little difficult to precisely explain and convey all these aspects to Customers on the telephone, hence this post.  To begin with, we don't  really know for sure how ...    shadow boxes got their name from, but it seems that ancient sailing ships' sailors would make these types of memory boxes for retiring sailors on their last disembarkations.

The memory shadow box would contain some of a sailor's personal objects or effects which would be kept on board until the retiring seafarer was safely ashore.  Only then would the "shadow" box" be brought on land and ceremonially presented to to the donee.

In this manner, the sailor's "shadow" could not touch land before the he ( in those days, almost inevitably a male ) disembarked and went ashore, thus bringing no misfortune on the vessel and its crew, according to ancient superstition.

In many different ways this mariner's credence has morphed and evolved into a keepsake tradition,  especially within the armed services of English-speaking navies.

Veterans and their families would proudly display, protect and treasure  such militaria shadow boxes as family heirlooms to be passed from one generation down to another.

Nowadays though, memory boxes and shadow boxes are much more likely to be bought and crafted by craftspersons, hobbyists and small business artists.

These ready-made frames frames are generally  easily and readily available at many stores and can lend themselves  to beautiful and wonderful creations and composistions, some of which are described in our post:  10 picture frames to make you cry in happiness.

But, back to the present.

Simply said, a shadow box picture frame has at least one, or more, raised window mats that will cast a shadow on the artwork whereas a plain box frame without a window mat will not.

And while there are other matting and spacing variations, this is the main difference between the two picture framing styles.

Professional picture framers tend not to use the inexpensive, popular shadow box frames  one sees in department stores.  It is instead the home makers, craftspersons, artisans and home decor enthusiasts that largely buy these frames.

Although arguably non-professional, amateurs or novices, they can often surprise professional frames on how imaginative and clever they can craft, build mount or stitch all manners and kinds of small objects and memorabilia inside these frames.

In the illustration below we show a common 30x30cms Black Shadow Box Frame in an exploded view, or deconstructed, in alternative, modern parlance, with a child's memorabilia mounted:

The numbered, schematic diagramme  above is detailed and explained hereunder as follows:

1) The picture frame.  This component is almost invariably of the "box frame" type. By that we mean a frame that sticks out from the wall more than it is wide.  In the photo above for instance, the frame, or  moulding, is  44mm high x 19mm wide, in other words, it is higher than it is wider, or "boxy" if you like, hence the name, box frame.

The height of the moulding  is important.  The higher it is, the thicker the objects that can be mounted inside the frame.  The lower or smaller it is,  the slimmer the object that may be mounted within.

In the photo above, the moulding displays the inner, hidden core constructed of the tan-coloured MDF ( Medium density Fibreboard ) and the exposed surfaces, wrapped in its black, paper-wrapped finish.

The inner core is not visible when the frame is assembled.  Importantly, the frame is always a few millimitres wider than a stated size.  Thus if the given size is 30 x 30 cms, the inside the frame is likely to be 30.2 x 30.2 cms.

This is called  a clearance and it is necessary so that the components inside the frame do not become jammed or stuck inside.  With sufficient clearances, the glass pane, window mat, backing and other picture frame components can be more easily inserted, fitted, and removed, if and when necessary.

2) The glass pane.  This is always sized exactly a little smaller than the inside of the frame and is usually likely to be the exact, stated, or advertised, size of the shadow box or picture frame. In fact many Customers, when wishing to be exact, mention or state the size of a picture frame as to its "glass size".

The glass itself, is often, but not always, clear float glass, rather than sheet glass.   If buying off-the-shelf shadow box frames and 3-dimensional photo frames is it important to inspect and discern from this inferior product.  It cab be often riddled with "seeds" and other imperfections, several of which are illustrated below:

Clear float glass is generally the best value-for-money commercially available at a reasonable price. While it is clear, straight, even and distortion-free, it is not a conservation or Ultra-Violet (UV) blocking product.

If framing valuable art,  precious heirlooms or irreplaceable objects, than it would be advisable to consider glazing with  UV-protection, rather than, clear glass.

UV Glass, as it's called by most picture framers, offers  near-100% protection against fading from ultra-violet rays.  For more information on this topic,  please visit the following post " about Ultra Violet (UV) protection conservation picture framing glass."

Care should be taken when removing and handling the glass pane because the edges are cleanly, sharp and are not chamfered or smoothed over, meaning that user could could themselves if caution is not exercised.

3) The window mat.  This particular component is also commonly called by various other names, such as "border", "surround" or "cardboard" but the proper name for it is as stated before, or a window mount, for those readers from United Kingdom.  Regardless of what it may be called, its function is simple.

A window mat keeps the glass away, or at a distance, from the artwork. This is desirable when photographs, inks, watercolours or water-based media is used for or with artworks. Condensation could possibly form in the inside of the glass, and melt, stick of fuse with the artwork.  The function and usage of this component also forms an important aspect of art preservation further addressed in our post regarding   conservation picture framing.

Aesthetically, a window mat, or mat, as it's often simply called, helps to define and highlight any framed art because it creates a visual border  between the artwork and the frame itself.   Window mats are clever visual devices which, by varying  their widths, proportions  and colours can have definite and distinct effects.

Mats also tend to cover a little of the artwork since a mat board sits on top of the artwork, however this is largely only true of art on paper. With 3-dimensional objects and memorabilia, this tends not to happen since the artwork is centralized, indeed as shown in the explode view above.

4) The artwork.  This is the core of the whole project  which can be pretty much anything small enough to fit- into the shadow box frame. We have seen and, have been told of wildly and  widely disparate objects being mounted and framed.

Thus, the type and kind of object that may be framed with our memorabilia shadow boxes is limited only by one's imagination and the depth of the shadow box itself.

In the case of the our Shadow Box Frames it's 2.8 cms and for our 3-Dimensional Box Frames  it's 1.5 cms.  For objects thicker or larger than those sizes, a specialist memorabilia custom picture framer may need to be consulted.

The key to success in the memorabilia framing of objects is mounting them.  Usually, and so far as picture framing is concerned, mounting is the glueing down of papers to a backing board to keep them stable and flat.

Object mounting however, is quite different, because most objects are irregular,  solid or multi-dimensional and simply cannot be glued and pressed flat.

While we do not cater for memorabilia framing and its specialist mounting processes, many of our "crafty" Customers swear by their either hot or cold glue guns and sticks which seem to bond, grip and hold almost anything when properly used.

5) The spacer. This component is usually made up of 4 narrow,  thin sections of MDF-wood, about 4 to 6 mm thick,  joined or fastened together at their ends to form a quadrangle or rectangle.

It is inside and within the spacers that any artwork is mounted. The spacers are 2.8 cms high. It is important to note this limit because objects taller, thicker or higher than this will not fit inside the shadow box frame.

Care must be taken when handling the spacers, because and owing to their construction, these are somewhat delicate and may come apart.

Should this happen, however, the ends of the spacers can be easily rejoined, with glue or even temporarily with picture framing tape, or similar.

Sometimes Customers contact us asking us if we can make and supply them with higher, or larger shadow boxes, or spacers, for larger, or thicker objects.  Unfortunately we cannot because all our shadow box frames are fully imported and none of them are made in Australia.

While this disappoints some, it is also a stark and brutal commercial reality that it is difficult, if not impossible,  to profitably sell Australian-made picture frames to the wider public.

Our manufacturing costs are simply too high and local picture frame manufacturers are uncompetitive in the open, world market.

6) The facepaper. The name almost makes it sound important, but it's not.  Usually this is a plain, white sheet of paper with an illustration, photo, or picture on it, often of a face which also faces the viewer, hence we guess, its name.  The other side of the paper, in our experience is always white, and blank.

This paper is usually quite thin and is often discarded by users who prefer a textured, coloured  or thicker, background. However it can be used as a mounting surface or backdrop if the object being mounted  if is light enough.

7) The back, or backing.  Unlike the preceding component, this last one is important.  Without it, the artwork and the whole shadow box assembly would fall out. It usually consists of a 3 or so millimitres thick MDF backing panel which fits inside at the rear of the frame.

Once in place, it holds and secures all the frame's contents together. It may be removed by opening the several flexible, or bendable, steel tabs at the rear of the frame. Putting it back is a reversal of of its removal.  The back also usually has one or more wall hangers staked into it and as shown in our A3 Black Shadow Box Frame  below: 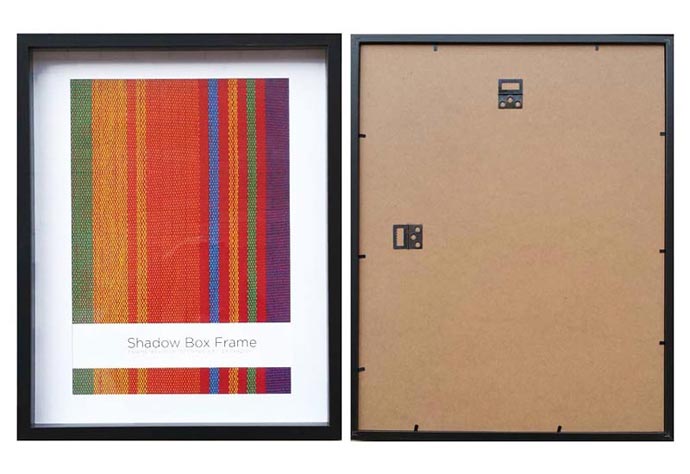 These will allow for either portrait or landscape hanging orientation for both share and rectangular shadow box frames.

As always, we recommend sealing the back of the shadow boxes with picture framing  tape to close any entry gaps to unwanted pestiferous pests as detailed in our post: Picture frames pests, intruders and akin insectiferous invaders.

We hope you enjoyed this post on what our shadow boxes are and how these may be used.